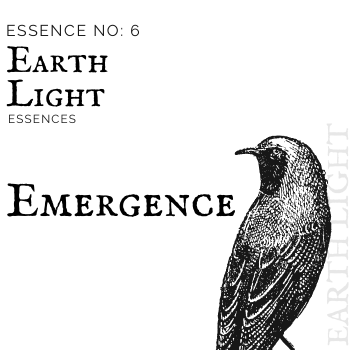 I am the consciousness that is being birthed by Gaia.

Emergence is a devic essence co-created with nature spirits near Salem, OR during the 2021 Fairy Congress. This essence started out with the name "reconciliation" as it was about human reconciliation with each other and with the fairy realm and nature. But when it was completed, it wished to be called "emergence" to honor that when two things come together a third is born. It works with the dynamics of the sacred masculine and feminine working together to bring about healing. It supports the trust in the birthing of that third thing. We never know quite what it will be, but we can open ourselves to the dance of becoming and breathe a collective sigh, hearts open, when the new emerges.

The Gate of Twilight from the Card Deck of The Sidhe by David Spangler and Jeremy Berg came in to support the essence. It spoke about being in a collective "in-between" space, deep in transition. The outcome is unclear, so the courage to step into the unknown is needed. This essence supports that courage through heart opening medicine. It is also about stepping into our power and, as we do so, owning all the parts of us in joy and humility, and holding our deficiencies with curiosity and compassion.

A little stream and the undine beings there (along with MANY other entities) offered their wisdom to this essence. Water is life. Change can be in flow. It can be tuned into the lifeblood of the earth, respectful of resources that sustain us. That is part of the reconciliation work and that respect allows for emergence.